Race out to see ‘Brooklyn the Musical’

“Fate has an agenda all its own and war makes orphans of us all.”
By Eric George Tauber 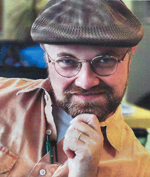 SAN DIEGO — Cabaret icon Leigh Scarritt –in association with Moxie Theatre- has put together for Brooklyn The Musical. I attended Industry Night to a house filled with thespians who couldn’t have been more enthusiastic.

Brooklyn describes itself as an urban “sidewalk fairy tale.” It’s tough to make it as an artist and even more so when the cost of rent is through the roof. This brings us to Street Singers Row, a humble open-air abode under the Brooklyn Bridge, which a group of homeless artists make their home and their stage. The bare bones storytelling in a humble setting with makeshift props like an orange road cone for a megaphone reminded me of Godspell, but with a much jazzier score. Musical Director Chaz Cabrera led a smokin’ hot six-piece jazz band that lit up the house.

David McBean narrates as the Streetsinger. A maven of musical theatre, I knew that he could sing; but I didn’t know that he could belt out a melisma with such SOUL. We were captivated from the get-go.

Brooklyn is a girl from Paris, the product of a brief, but passionate love affair between Faith –a Parisian cabaret singer- and Taylor, an American GI on his way to Vietnam. Music gave Brooklyn a way to cope with the tragedy of her life. As a child, she saw her mother take her own life. Now grown, she goes searching for the father who never knew she existed with no more information about him than his hometown: Brooklyn, New York, and the unfinished lullaby he wrote for her mother. Samantha Tullie in the title role sings with a sonorous set of pipes that reminded me of Glee’s Lea Michelle.

When looking for long-lost family, it’s good to keep expectations low. Jordan Cavanaugh is heartbreaking as Taylor, a wounded vet who’s self-medicating. While the Vietnam War is fading into history, PTSD is an issue that sadly never disappears.

Kevane La’Marr Coleman bursts onto the scene with flair as Paradice. The Wicked Witch of the Hood, she’s a cut-throat diva who will stop at nothing to retain her crown. After years of hard work, her image finally graces Brooklyn’s Wall of Fame alongside the late great Henny Youngman and Abe Vigoda. When Brooklyn’s image is also added, it’s ON. Paradice throws down the gauntlet for a diva duel, winner-take-all. Kevane gave Paradice great depth for behind the prickly, bitchy façade is a lonely, insecure soul in a world of pain.

Give a standing ovation to Leigh Scarritt and the ensemble of Brooklyn. They remind us that you don’t need a huge cast and full orchestra to put on a great musical. What you need is a story and a score that you can pour your heart and soul into. You need a tight ensemble with spirit and a love for the craft. And these ingredients, they have in spades.

So race to the Moxie Theatre in the College Area. Brooklyn the Musical plays only through July 30.

*
Tauber is a freelance writer specializing in coverage of the arts.  He may be contacted via eric.tauber@sdjewishworld.com