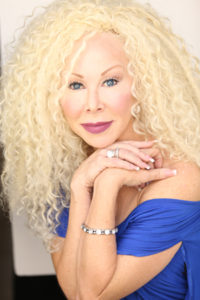 Miss Leigh Scarritt is a veteran of film, television and stage and has performed all over North America. When not on stage Leigh is a mentor and coach to dozens of San Diego’s up and coming young talent. Many of her students have attended such prestigious universities as NYU, Yale, Boston Conservatory, UCLA, Syracuse, Pace and USC. Leigh is an award winning director, choreographer, musical director and composer. Over a hundred of her students have appeared in The Old Globes’ production of HOW THE GRINCH STOLE CHRISTMAS. Her students have been finalists on The Voice, America’s Got Talent and American Idol. She currently has students on Disney and Nickelodeon. Her “Girl Band” has won awards throughout Southern California and is a much sought after performance group.

Some of her favorite roles include Velma Von Tussle in HAIRSPRAY, Grandma Who in HOW THE GRINCH STOLE CHRISTMAS, Nana Lu in BLUE BONNET COURT, Billie Dawn in BORN YESTERDAY, Eva Peron in EVITA, Marjorie in the ALLERGIST’S WIFE, Queen Aggrevaine in ONCE UPON A MATTRESS, Delores in WORKING, Woman 1 in I LOVE YOU, YOU’RE PERFECT, NOW CHANGE, The Agent in NINE, Frenchie in GREASE, Ms. Pennywise in URINETOWN, Morgan Le Fae in CAMELOT, Sally in CABARET, Audrey in LITTLE SHOP OF HORRORS and Mrs. Peachum in THREE PENNY OPERA.

Miss Leigh considers her most important role as that of mother to her daughter, Tiffany Jane, a gifted musical artist who is proud to announce the release of her new CD.